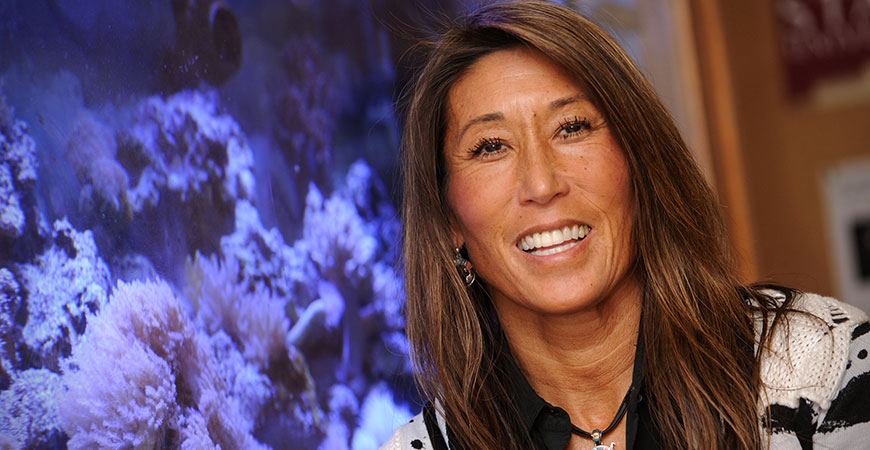 Molecular and Cellular Biology Professor Michele “Nish” Nishiguchi has been inducted as a Fellow of the California Academy of Sciences and was recently named president-elect for the Society for Integrative and Comparative Biology (SICB).

She is one of 11 distinguished scientists inducted at the California Academy of Sciences’ Annual Fellows Gathering this year.

“I am delighted that the California Academy of Sciences is acknowledging the quality and impact of Professor Nishiguchi’s research program,” School of Natural Sciences Dean Betsy Dumont said. “Her leadership in science as well as her mentorship of fellow faculty and students have had a significant, positive impact on our campus. She is a wonderful role model for us all.”

Former UC Merced Professor Monica Medina nominated Nishiguchi. Inductees are nominated by their peers and elected by the California Academy of Sciences’ Board of Trustees. There are more than 450 Fellows recognized for their contributions to science.

“It's a great honor to be recognized for your accomplishments,” Nishiguchi said.

The San Francisco-based California Academy of Sciences began in 1853 as a small collaborative of researchers displaying their findings from the natural world. It has become an institution focused on the grand challenge of regenerating the planet through science, learning and collaboration.

Nishiguchi came to UC Merced in 2020 from New Mexico State University. Her microbiology lab focuses on the evolution and ecology of associations between animals and their bacterial partners.

“I really want to do some collaborative work with the museums,” Nishiguchi said. “I envision doing a big exhibit over there, maybe on beneficial symbioses. The museums are all about educating the public and I get to be part of that mission. I'd love to help them design and fundraise for the exhibits because it's another way to spread the word and get people excited about the science.”

Nishiguchi’s other new position, president-elect of SICB, comes after many years of membership. She joined the society in 1988 as a master’s student and has been an active member, helping recruit other society members, and obtaining grant funding to increase enrollment among students, postdocs and faculty from underrepresented communities to help them attend society meetings. She ran for president on a platform of increasing diversity and inclusivity. As president-elect she will serve as a vice president for two years before taking the reins.

“I love this society because it's really committed to the students,” she said. “I'm all about training and making sure that students learn from their experiences, and I love taking my students to this society’s meetings because they always learn and grow as science communicators. SICB is student oriented, and has always welcomed the students with workshops, opportunities to network with new mentors, and socials aimed particularly for this next generation of scholars.”

The SICB is dedicated to research, education and public awareness in the areas of organismal, functional and evolutionary biology. Formed in 1902, the society has approximately 3,000 members whose research interests range from organismal biology to population biology/ecology to systematics and evolutionary biology. This society also supports students in these fields through grants, awards, fellowships, internships and professional development.